Alfalfa (Medicago sativa) is a perennial flowering plant of the pea family. It is cultivated as a common forage crop in many countries.

The plant is called Alfalfa in North America. But in the United Kingdom, South Africa, Australia, and New Zealand it is more commonly known as Lucerne.

The plant favors warmer climate and has been cultivated as fodder since Roman times. It looks like clover and has clusters of small purple flowers that produces fruits in 2-3 turns containing 20-30 seeds.

Alfalfa is a perennial plant that can grow up to 1 meter at a moderate rate. It is a very hardy plant and it can withstand a wide range of climatic conditions from cold temperate to warm sub-tropical and is hardy to zone (UK) 5, (USDA) 4-8. It flowers from Jun to July and the seeds ripen from Jul to September. The flowers have both male and female parts and are insect pollinated or self-pollinated. The plant is self-fertile. 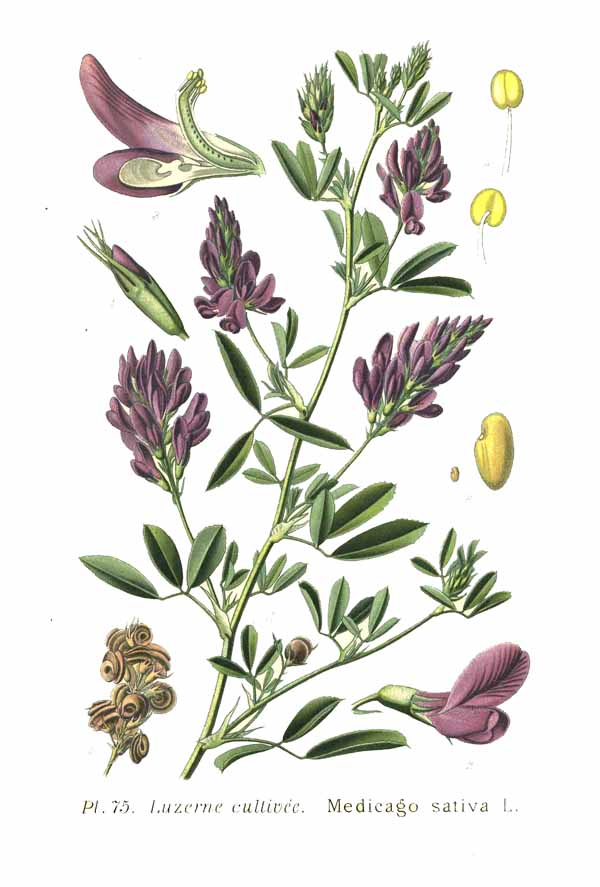 Alfalfa thrives in rich, friable, well-drained loamy soil with loose topsoil, especially if supplied with lime. But it cannot tolerate waterlogged and acidic soils. It requires an optimum level of potassium and phosphorus to grow properly.  But it is sensitive to salt levels too. It requires a manure or chemical fertilizer to grow in infertile soil but maintain an optimum level of pH is very important.

“Alfalfa leaves, either fresh or dried, have traditionally been used as a nutritive tonic to stimulate the appetite and promote weight gain[222]. The plant has an oestrogenic action and could prove useful in treating problems related to menstruation and the menopause[254]. Some caution is advised in the use of this plant, however. It should not be prescribed to people with auto-immune diseases such as rheumatoid arthritis[238]. See also the notes above on toxicity. The plant is antiscorbutic, aperient, diuretic, oxytocic, hemostatic, nutritive, stimulant and tonic[55, 165, 218]. The expressed juice is emetic and is also anodyne in the treatment of gravel[218]. The plant is taken internally for debility in convalescence or anemia, hemorrhage, menopausal complaints, pre-menstrual tension, fibroids etc[238]. A poultice of the heated leaves has been applied to the ear in the treatment of an earache[257]. The leaves can be used fresh or dried[238]. The leaves are rich in vitamin K which is used medicinally to encourage the clotting of blood[213]. This is valuable in the treatment of jaundice[213]. The plant is grown commercially as a source of chlorophyll and carotene, both of which have proven health benefits[222]. The leaves also contain the anti-oxidant tricin[222]. The root is febrifuge and is also prescribed in cases of highly colored urine[218]. Extracts of the plant are antibacterial[218]. Used for asthma, diabetes, gastrointestinal disorders (anti-ulcer) [301].” – Plants for a Future

Alfalfa seed is very easy to obtain. Here are a few good sources for the seed:

Plants For a Future