Autumn olive (Elaeagnus umbellata), also known as Japanese silverberry, is a nitrogen fixing shrub or small tree that carries a great abundance of juicy small fruits, and grows up to 4.5 m (14ft) by 4 m (13ft).

First introduced into North America in the 1830s, it was originally used for strip mine reclamation and to provide food and cover for wildlife. Today it’s seen by many as an invasive species, while others see it as a potential commercial cash crop. 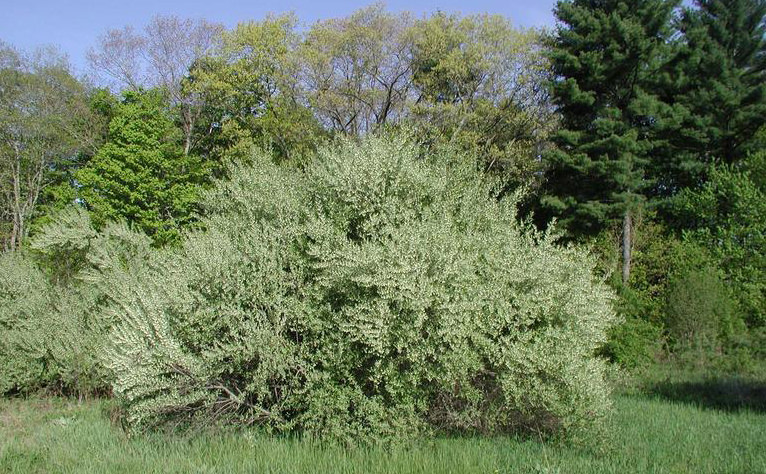 You’ll readily recognize the plant by the distinct silvery color of the leaves, particularly on the underside, the small pale-yellow fragrant flowers that emerge in April, and the red berries that ripen in autumn. 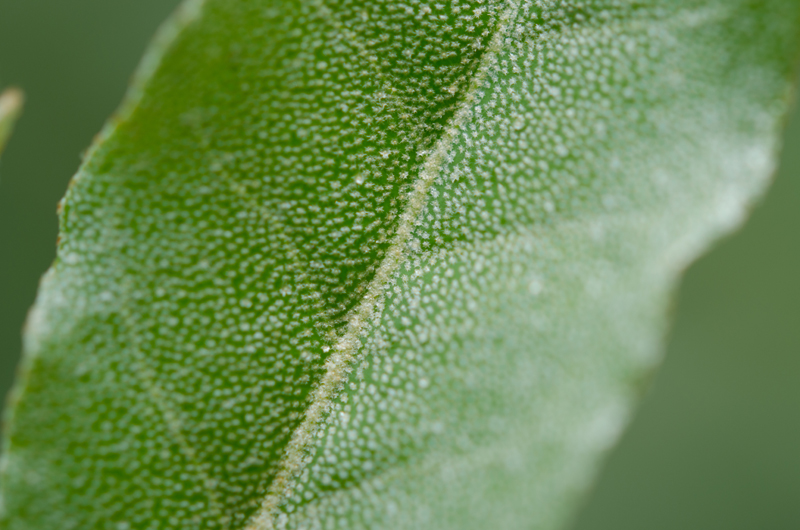 Underside of a leaf of Elaeagnus umbellata (autumn-olive), showing silver scales’ structure. Taken in Pennsylvania, US in August 2013 by Mark Fickett.

The species is indigenous to eastern Asia and ranges from the Himalayas eastwards to Japan. It’s hardy to zone 3 in the UK and USDA hardiness zones 3-7. The plants are tolerant of drought and frosts, saline soils, and of soil pH ranging from alkaline to acid.

Birds are attracted by the ripe fruit and subsequently scatter the seeds. As a result,
wild plants are found growing throughout the Eastern U.S. In the mid-Atlantic region the shrubs are commonly found along roadsides and fencerows.

Before you decide to plant autumn olive on your land, know that in some parts of North America where it has become naturalized, Elaeagnus umbellata is considered an invasive species.

Plants do not spread by root suckering, but can be quite persistent once established, growing back from the roots when cut down or mowed off. This, combined with seed dispersal by wildlife, and the ability to thrive in poor soils, can lead to unexpected and unwanted spread of the plant into grasslands, pastures and open woodland where it easily outcompetes native plants.

As Plants for a Future cautions:

“E. umbellata has the potential of becoming one of the most troublesome adventive [non-native] shrubs in the central and eastern United States.”

As possible replacements for autumn olive in North America, you can plant these non-invasive native species: hawthorns, plums, ninebark, hazelnut, serviceberry and dogwoods.

Note: Because of it’s ability to spread and outcompete native plants, check your local state recommendations before planting autumn olive.