Since 2006, John Michael Greer has been sharing his views on peak oil, technology, economics, religion, and the future of America on his blog The Archdruid Report. From his writings, he has produced no less than 10 books, including The Long Descent, The Wealth of Nature, and his upcoming book, After Progress: Reason and Religion at the End of the Industrial Age.

His first book based on the blog, The Long Descent, is a fascinating viewpoint on what might be coming up in the future of a world that is quickly running out of economically viable oil and no clear replacement. It provides a vision that is neither locked in cornucopian visions of progress, as many governments and corporations would like us to believe, but neither is it locked into myths of crash and apocalypse.

Instead, Greer takes lessons from ecology and the history of previous civilizations to reveal the patterns that are causing the collapse we are currently undergoing, and what we can do about it to survive the long descent.

What is The Long Descent?

The core idea of the book is that civilizations do not collapse suddenly nor continue indefinitely. Instead, they rise, peak, and decay in predictable patterns. To understand this, we need to lay out some definitions. A civilization can be defined by four things:

Let’s take a look at a growing or stable society. Assume there are abundant resources and the knowledge to produce things. As things are produced, capital is created. Capital, in this example, has a much wider definition than you may be used to. Anything that doesn’t come from nature or through direct human labor, whether it is a physical good like a building, human like a trained worker, informational like our methods of manufacture, and social systems like our government, are a form of capital to the civilization as a whole.

When these capital “goods” are produced, a certain amount of waste is generated. Capital also has a maintenance cost over time that goes into waste, but it also feeds into greater production. However, the fundamental component driving the entire thing is the resource base.

“In a growing or stable society, the resource base is abundant enough that production can stay ahead of the maintenance costs of society’s capital – that is, the physical structures, trained people, information, and organizational systems that constitute the society. Capital used up in production or turned into waste can easily be replaced.”

But what happens when collapse starts to happen. That is, when the “paycheck” from nature starts running dry? First, production cannot meet the costs to maintain capital. Capital starts turning into waste. As capital decreases, production decreases which in turn causes capital to decrease and more waste to develop. This creates a feedback loop that will kill capital, and thus the civilization, until a balance point is reached where capital and production return to a level that can be sustained by resources.

The depletion of natural resources matches a bell curve over time. Most of you are probably familiar with peak oil and Hubbert’s Peak. It is the famous graph developed in the 1950s that tracks how an oil field’s production raises and lowers over time. It is not a sudden plummet. The same curve has been shown to apply with many other resources as well. 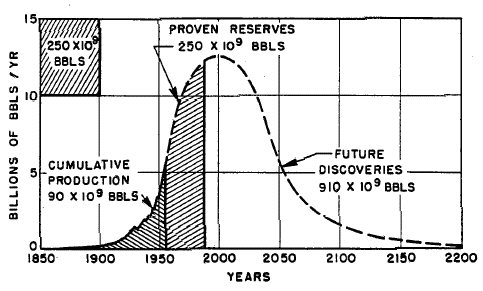 Thus, when our resources start to go past the peak of the curve, as worldwide oil peak has already done – Greer says that happened in 2010 — there is no cliff but a slow decline punctuated by crisis points when a particularly useful bit of capital can no longer be maintained. Once the forces of collapse make the civilization give up those things, resources can be refocused on less resource-expensive capital. Things will stabilize for a time, then drop again with another crisis until finally the amount of capital remaining is easily maintained by whatever resources are left.

The main upcoming crisis points are:

Citing several historians, mainly Oswald Spengler, Arnold Toynbee, and Joseph Tainter, Greer says that the average time from peak to full collapse takes about 100-500 years with an average about 200. Greer’s position is that it is already too late to stop the collapse, citing the efforts of the 1970s and how they collapsed in the 1980s due to the oil crash. However, there is a long lead time where the positive, and sustainable, capital from our current civilization could be transmitted into the future. Not only that, but there are things that we can do as individuals to cushion the shocks that are coming.

One of the first things he suggests, before he even digs into his theory of the Long Descent, is that our previous reactions to peak oil have been largely shaped by two stories: the myth of progress and the myth of apocalypse. In order to find a way out of the predicament of peak oil with a good solution, we have to find a new myth to guide our actions.

The myth of progress, put plainly, is the belief that the future will always hold something better, that humans will continue to dominate nature, and that we will always find a way to solve the problems of our time. It’s the familiar cornucopian ideal that shuts its ears and loudly denounces any attempts to save our natural resources or enact legislation that could have cushioned the shock of collapse. In short, everything will always get better over time, so there’s nothing to be done. And if something does go wrong, it’s not your fault.

The myth of apocalypse takes the opposite approach. Either there’s nothing that can be done at all, so there’s no use in trying, or it becomes imperative to protect yourself and maybe a few others and hole up until after the collapse is finished with the resources to start anew. Neither approach yields a constructive result to the long term problem of a collapse that will continue far beyond any of our lifetimes.

Greer instead presents the reality of the situation that we’re in and challenges us to come up with our own stories. His book “The Ecotechnic Future” goes into more detail on possible guiding stories and myths that could shape the societies of the future long after we’re gone. But beyond finding a new myth, how does Greer suggest we respond to what is forthcoming?
Strategies that don’t work

First, he describes the strategies that have been tried before and aren’t going to work. Part of the thread that connects the progress and apocalypse myths is that all of our problems have a technological solution. However, peak oil is also a social and cultural crisis.

The first thing he denounces is political action. While many groups have addressed the problem to governments for decades and reams of paper have been printed with information about the problem, the warning have been ignored. Why? The energy demands of a peak oil future and the energy demands of our current industrial society do not mesh. Many of the things we take for granted, like a morning cup of coffee, have huge hidden energy costs. To realistically cut the amount of energy use we need to get back to maintenance levels that would require sacrifices that no politician could put forward without committing political suicide. Readers of a certain age may remember the flak President Carter caught when he wore sweaters in the White House and installed solar panels.

The second thing he denounces is survivalism, which he defines as the belief that holing up with food and firearms and living frontier style while the world crashes and burns. This is a common response by people who do not trust progress. However, most survivalist solutions focus on short-term crises, not multi-generational declines. Also, history has shown that the rural areas of civilizations collapse faster than the cities and that rich caches of resources make for tempting targets. A better thing to hoard would be useful skills and to stay close to a community that can use them.

The third thing he denounces are “lifeboat communities”, like ecovillages, that combine problems from both strategies. Not only does it provide a rich resource cache, but most people do not have the political will to reduce their lifestyles to the levels necessary to do true subsistence farming. Also, many of the plans for ecovillages require large amounts of money and initial resource inputs.

Greer offers four ways that individuals, our families, and our local communities can take action to cushion the shocks that are coming our way. None of these require government intervention, just the willingness of people to take action, set an example, and teach others what they have learned.

He goes into greater detail in the book on these topics, and in far greater detail in his book Green Wizardry, but he does list ten first steps to sustainability that you can do right now to start preparing for the Long Descent:

That last one requires some extra explanation. As Greer explains:

“At the core of the consumer society — and the fossil fuel powered industrial system that spawned it — lies the conviction that the highest goals of human existence can be found in material consumption. This notion took shape in opposition to an equally dysfunctional belief that despised the material world and grounded all human hopes in an invisible otherworld on the far side of death. The bitter sibling rivalry between these twin ideologies has hidden from many people the fact that many other options exist. In the twilight of the industrial age, the faith in progress that buoyed the consumer economy faces extinction, but the hopes once confined to it deserve better homes. In spirituality as well as ecology, diversity is a positive good, and it’s long past time we discard the claim that every human being can, much less should, approach the great mysteries of existence in the same way. Whatever your own vision of spirituality may be, then, explore it more deeply, and study its teachings in the context of the coming deindustrial age. You may find that, seen in that light, those teachings make an uncommon amount of sense.”

If the ideas in this article have intrigued you, check out the full book or start at the beginning of Greer’s blog The Archdruid Report and read through the first couple of years. But don’t let the ideas just stand idle in your head. Start taking steps now, while we’re on the high end of the descent to prepare for the future.