We all take our water toilets for granted. Flush and the nasty stuff almost magically disappears. But what if something breaks and we have to deal with the waste ourselves?

Believe it or not, there are actually many benefits of managing your own waste, or “humanure” as it’s called, with the main benefit being lots of free fertile compost to be used in your garden.

It’s one of those things many people might actually consider doing were it not for all the gross, decomposing feces you’d need to store and transport about your property.

Obviously composting your poop isn’t practical for most people but there are many situations where you would not have a choice, for example a major local breakdown of the sewage system, lack of existing infrastructure (at a wilderness cabin or in developing countries), or lack of money to repair or maintain your aging septic system.

In this article we’ll explore what off-grid toilets are all about, how you can build your own cheap toilet, and compare the various commercial alternatives on the market.

Nearly 2.6 billion people across the globe lack any sanitation system. The result is that more than 200 million tons of human waste goes untreated every year. The majority of this waste – 90 percent in developing nations – winds up being discharged directly into lakes, rivers, and oceans.

Another troubling aspect of the handling of sewage in “developed” nations is that we flush away our human waste with clean drinking water, creating a toxic sludge that can only be cleaned with expensive and centralized waste treatment infrastructure.

The consequences of inadequate sanitation are dire to public health. According to the World Health Organization, poor sanitation kills approximately 1.4 million children each year – one child every 20 seconds – more than AIDS, malaria and turberculosis combined.

People are not dying from the lack of toilets in the western world, but having a sound sewage system is essential for the health and well-being of communities throughout the world.

Traditionally, humanitarians have worked to implement flush toilets to solve this problem. But flush toilets rely on sophisticated waste treatment infrastructure and can be incredibly costly, particularly in many poor or extremely remote areas of the world. And even where this is a feasible solution, the reality is that many sewage systems break down.

Sewage systems rely on an aging electricity grid prone to failure, and there are many points of failure along the supply chain that can cause your toilet to stop working. It does not take many days of disruption before even a modern city start feeling the dangerous effects of a broken down sewage system.

This reality has given rise to a new trend – off-grid toilets.

Off-grid toilets, also known as waterless toilets, are a great way to provide sanitation with minimal infrastructure and at a low cost. This is good for developing nations that have access to limited resources, as well as people living in remote areas who may be able to easily hook up to a grid-based system or would prefer not to purchase a septic system. And off-grid toilets are increasingly popular in many drought-prone regions since they are much less water intensive than their flush counterparts.

The Basics of Off-Grid Toilets

As the name implies, waterless toilets, do not require water to process waste. Instead, they rely on the natural process of breaking down excrement and waste through a process known as composting. Composting is the breakdown of organic materials that occurs with the right combination of temperature, moisture, oxygen, nutrients and bacteria are applied. This process occurs naturally in nature, but actively composting expedites this process. The byproduct of composting is manure, a natural fertilizer that can be used to boost nutrients in agricultural products. 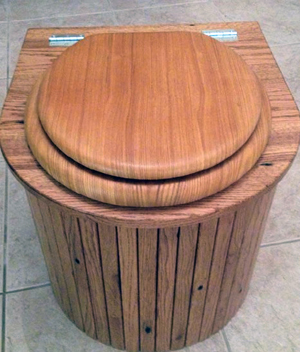 During the composting process, organic materials, fecal matter in this case, are broken down by naturally existing micro-organisms, including bacteria, fungi, and actinomycetes. The compost material must then be exposed to enough oxygen, water, and nitrogen and be kept at the right temperature for this process to set in motion. By managing these factors, you can control the speed of decay, thereby breaking down the organic material much more quickly.

Here are some tips for creating the optimal mixture of oxygen, water, and nitrogen and maintaining a good temperature.

There are many different design options for off-grid toilets. For instance, do you want a self-contained or remote system? A self-contained toilet will compost the waste directly in your toilet. This model is ideal for lower-use systems, where six or fewer people are regular users. Remote off-grid toilets carry the waste down a chute into a composting bin that is separate from the toilet; these are good options for systems that will receive higher use.

Some off-grid toilets use power and others do not. Those with power have fans and heaters that expedite the composting process by helping to evaporate urine and aerate waste. Toilets without power have some type of ventilation system that achieves this same end, just at a slower paste – these types of toilets are intended for lower use.

Finally, another decision is whether or not to separate urine and feces within the system. More commonly, toilets have one receptacle for both. Toilets with urine-diverting functions have a seat that catches urine and funnels it through pipes, often to a homemade pit or wetland area, but sometimes to a tank where the water can be diluted and hooked up to a garden hose – another benefit to crops.

Building Your Own Off-Grid Composting Toilet

You can opt to buy or build your own off-grid toilet. Buying a prefabricated toilet costs anywhere from $800 to $4,000 (more on that later), but building one on your own can cost as little as $25, depending on the functionality and standard you’re looking for. To build a basic off-grid toilet, you will need the following materials: 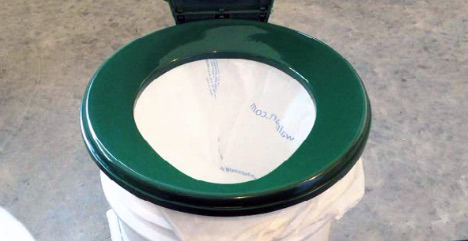 Then, follow these steps to put your off-grid toilet together:

Poorly made and maintained off-grid toilets can pose health threats. Specifically, exposure to poorly treated waste exposes people to sickness caused by bacteria, viruses, protozoa and parasitic worms that can accumulate in the waste.

At the most basic level, maintaining a composting toilet requires adding dry, carbon-rich materials – like saw dust – to the receptacle after each use, especially if the contents appear watery. This helps to dry the material within the toilet.

Covering up odors is another important thing to consider. A properly maintained and ventilated composting toilet will not smell. Off-grid toilets start to smell though when the waste is not properly aerated. As such, ventilation is key to keeping stench under control. Some toilets use motorized fans to properly aerate the waste. Non-power models have ventilation designs that naturally draw air from within the toilet receptacle to the outdoors in a one-way direction. More than anything, having healthy compost in the toilet is the single best way to reduce odors.

Off-grid toilets must also be cleaned regularly just as a typical toilet does. If you empty the waste container into a compost pile you can wash the container with warm water and soap before putting it back into the toilet base. Some commercial off-grid toilets have removable bowls that make cleaning even easier.

Finally, off-grid toilets need to be emptied from time to time – the frequency varies by toilets’ size and design, but typically should be emptied out every few months with a commercial toilet, or every other week with a regular DIY composting toilet.

There’s no escaping from the fact that the business of emptying and cleaning the toilet is a dirty matter. In the old days before widespread adoption of the water toilet people called “night soil collectors” or “nightmen” went around communities at night and collected the waste. Today you’re on your own though if you want to go down this path of setting up an off-grid toilet.

So what do you do with the waste? The contents of the toilet can either be buried or, after having gone through a proper composting process for at least a year, be applied to a garden as fertilizer.

You can find a good selection of waterless toilets at major home improvement stores, like Lowes and Home Depot. Here are a number of commercial brand names to look out for:

For those that don’t want to deal with the composting process or the dirty matter of handling the waste, there are other options for off-grid toilets. Incinerating toilets are toilets that actually burn waste. They must be powered either with electricity or with gas. Then, waste is incinerated and reduced to sterile ash.

Another option is a freeze toilet. Freeze toilets actually do just what they sound like – they freeze waste solid using a built-in refrigeration unit. There is no smell from the waste because as soon as it hits the base of the toilet the waste is frozen quickly. Freezing the waste also makes it more hygienic because by cooling the waste down to five degress it retards all biological activity in the waste. All you have to do is empty the frozen waste into a compost heap from time to time where they waste will break down into manure. Again, freeze toilets must be electrically or gas powered.

Here are a few examples of commercially available incinerating and freeze toilets: