One of the challenges of the resiliency movement is preserving the good parts of our current culture for future generations. The hallmark of this era of human history has been technological and scientific advancement. Yet much of that information is locked up in the hands of specialists and guarded by patent laws.

Open source software has its source code open to the public to view and to edit. This allows people to fix problems, point out improvements, learn from the code for their own projects, or even use that code as a basis for their own projects. It’s a very robust way to make software. Some of the most popular software packages today run on open source software. WordPress runs about a sixth of the websites out there, and Firefox is a very popular web browser. Both are open sourced.

Similarly, most physical objects made today need machines for their creation. Without the know-how to make those machines the objects are out of reach without the money to buy them or the knowledge to build their own. Even with the knowledge, getting blueprints and schematics for known working machines can be impossible due to licensing and patent laws.

Open source hardware projects provide the blueprints necessary for anyone with the materials and the skillsets to build their own products. To be truly open-source, the plans must be in a format that can be altered and doesn’t require an intermediate closed-source object to be created first.

Originally the movement was had electronic and mechanical designs in mind. Arduino is one example of electronic design and the RepRap 3D printer is an example of a mechanical design. Arduino (in a nutshell) is a small circuit board that can act as a set of sensors for projects. RepRap is a self-replicating 3D printer that is extremely popular. One of the biggest areas of development in open source hardware has been in 3D printing. People put up open source schematics for objects like parts online which can be printed by anyone with one of these printers. You may have seen news stories about 3D printed weapons. These are also examples of open source hardware.

Yet open source hardware plans don’t have to be just for highly technological projects. One quite simple form of open source hardware has been around for centuries: clothing patterns. When you buy a clothing pattern, it has complete instructions on how to assemble a garment for several different sizes. Once someone understands the pattern it can be shared with others. There’s also nothing stopping a skilled tailor from altering the pattern.

Open source hardware is not so much a way of building things but a way of sharing the knowledge of how to build things. That’s what makes it resilient. If the information to make a component is locked up in one institution or one person then it’s in danger of being lost. If the recipe for how to make something is preserved and spread around, then it is possible that it could be made again in the future.

There is much benefit that can be gained by having the tools to build things locally as resource depletion picks up. One of the first things that is going to see tremendous shockwaves in this country is our transportation systems. Americans are too used to having things shipped from all over to their doorstep. But if a community can make some vital machines beforehand out of their available materials, they can maintain a higher quality of life.

As our society changes to a post-peak-oil society, certain technologies are not going to make sense anymore. They will be too energy intensive or require materials a local community cannot get easily. But there may be advanced technologies that could be done locally if the community knows how to make them.

In fact, there was a story in 2002 about a child in Malawi, Africa who gained access to information about building a wind turbine from a book in his school’s library. William Kamkwamba had to drop out of school, but still had access to the information. After much trial and error, local materials, and about $16, he constructed a windmill that could power a few lights and a radio for his village. He also constructed a car battery backup system for when the wind was low.

The 12 meter tall windmill was made of scrap lumber. His original blades were PVC, and the generator was a bicycle dynamo. He did all this with just the knowledge in the book and experimentation. He didn’t even know what a computer was, let alone the Internet. He became famous for his ingenuity and now has an NGO to help bring his windmills to other villages. Mr. Kamkwamba now has a blog which you can learn about his story at http://williamkamkwamba.typepad.com/

The bottom line is that if you’re planning for resiliency, you should be able to know how all of your systems work and how you can pass that information to someone else. So where can you find plans? One great source is to take a trip to that old-fashioned institution called your local library. There are many older books that have detailed instructions on how to build things. A university library is even better.

But let’s take a look at two sites online that are collecting plans. The first is Open Source Ecology. Their goal is to create an open source economy by providing open sourced blueprints for industrial and agricultural machinery that can be built cheaper than current models. By collaborating with others on the design of the blueprints, they believe that a more efficient and innovative economy can be created.

They’re not thinking small either. The core of this project is Global Village Construction Set. This is a set of 50 machines essential for modern life. Part of this set includes fabrication machines that can be used to make other machines that aren’t part of the core set. It’s an impressive list of heavy machinery. The full list can be found at http://opensourceecology.org/wiki/Global_Village_Construction_Set. The group is selling builds of their prototypes to get the funding to build the rest of the kit, but the plans for some of the devices are available.

One of the ways they are trying to be resilient with their designs is to make the components modular. An engine or assembly for one machine should be interchangeable with another. All the machines must also be user-serviceable and DIY. The construction set also includes machines to recycle metal so new machines can be formed.

While the projects are still being developed, significant progress has been made on several of them. The basic power unit, the Power Cube, is now in its seventh prototype. The cube is designed to take any off-the-shelf gasoline engine and merge it with a hydraulics system. The open design of the cube makes repairs simple, and all the hydraulics feature quick-connect hoses.

But what about smaller scale projects? Many of the smaller projects are focused on 3D printing and electronics, but there are some that are of interest. Farmhack.net is a wiki and forum for farmers who want to develop, document, and build tools for resilient agriculture. 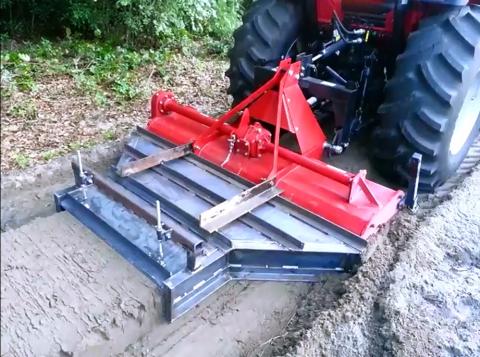 It was founded by a group of startup farmers that didn’t want to participate in modern agribusiness farming, which is highly energy intensive and capital intensive. Instead, they wanted to help farmers build tools that an individual could build and repair on their own. The entries come in four main categories: concepts, working prototypes, DIY plans, and commercial products. Yet all of the items and ideas are open sourced. Some of the plans are extremely simple. Here is a device for draining butchered chickens after washing and to assist in bagging. A more complex DIY project on there is a set of cattle scales that can be built for about half the cost of a new commercial scale. Many more tools can be found at http://farmhack.net/tools.

The great thing about Farmhack is that it is entirely community driven. It’s people helping other people to achieve the goal of sustainable agriculture, which is important for any resilient community. If you’ve ever done any reading about how modern agribusiness works, you know that without modern transportation and a steady supply of oil the process would fall apart. 150 years ago nearly everyone knew at least something about how to grow a garden or how a farm works because our lives depended on it. In the last 60 years the number of farms in this country has dropped by over half. In order to avoid a food crisis later, people like you need to learn how to grow food and teach others how to do it.

Sites like Farmhack do more than just give out tool information. It’s also a community of farmers helping farmers do their jobs more effectively and with a sense of communal pride. It also allows people outside of the farming community to add input on how to make traditional farm tools better. Take a look at this improvement for the 3-point hitch. The improvement allow the hitch to self-align with any standard tractor implement. It also allows the driver to unhitch the current implement easily. This saves time for the farmer and can also help prevent injuries while switching out different attachments.

How can you get involved? You can start by googling around for plans and adding “open source” to the queries. That will start to turn up lots of sites. Then get in there and start learning and participating. If you have a rare but useful skillset, think about what you can contribute. Try building some projects and giving feedback back to the creators so they can make better versions. Get inspired!

One easy way to get involved is to look for a local Maker Faire. Maker Faires are like a science fair combined with an art show that brings together creatives of all stripes to share with others what they have made. It was originally started by Make Magazine, which focuses on DIY projects. The projects at Maker Faires are quite varied. A list of attendees at the 2014 Atlanta Maker Faire include a mushroom cultivator, Star Wars geeks, geocache enthusiasts, kite makers, 3D printers, and copper forgers. That’s just a small sample. See the full sample at http://makerfaireatl.com/2014-makers-2/.

For some other sites to start your explorations, here are some sites to look at:

Remember, if you want to be part of a community that means you have to contribute. Share your skills with other people so that they be preserved for future generations. If there’s something you really like about modern life, learn it thoroughly, find out how to do it sustainably in a post-oil society, then pass it around to others. That way, the good parts of industrial civilization can live on well past the time we leave this earth.