The term biogas refers to natural gas that is generated from the biological degradation of organic material in the absence of oxygen. The gases produced from this process are methane, hydrogen, and carbon monoxide. The methane in particular, which makes up about 60% of the output, can be combusted just like other forms of natural gas and used as a fuel source for heating. This methane gas can also be converted into electricity to power electrical devices. Also, by adding large amounts of pressure to the biogas, it can be transformed into compressed natural gas or CNG as it’s often called and then used to power vehicles.

Someone who knows a lot about biogas is Warren Weisman, co-founder and CEO of Hestia Home Biogas, an American renewable energy company based in the Pacific Northwest.

Warren is an internationally recognised expert on biogas and anaerobic digestion, and with Hestia Home Biogas he’s helped introduce the world’s first commercial home biogas digester for colder climates. “Think of it as a great looking compost bin that also gives you a free BBQ bottle of propane every 8 days.” he says.

A typical American household with a lawn or garden will generate enough energy to cook three meals a day, all from your own waste.

The process of converting organic waste into a biogas occurs through what is called anaerobic digestion. Anaerobic digestion happens as organic materials, like manure, sewage, and plant materials are fermented – in other words, they biodegrade and the byproduct gas is captured, stored and used for fuel.

Biogas is considered a renewable energy source, because organic materials are limitless. Not only does the process of creating biogas leave a very small carbon footprint, but harvesting biogas from landfills and farms actually has significant impacts on capturing greenhouse gases that would otherwise have seaped into the atmosphere – this is because biogases are naturally created in landfills and on farms and the methane is released into the atmosphere without intervention.

Biogas is also incredibly versatile. In its untreated form, methane can be used to heat buildings, water, or as cooking fuel. However, it can also easily be converted into other forms of fuel that can be used for electricity, combined heat and power systems or as fuel for vehicles. The Environmental Protection Agency estimates in 2010 that the U.S. has the potential to offset vehicle fuel for 6.5 million cars from biogas alone.

Many see potential to use biogas plants to provide base load electricity in place of coal fired power plants. Other forms of renewable energy resources, like solar and wind, are intermittent, but biogas can provide a consistent, steady stream of power to meet these electricity demands at all times of the day. In North America, it’s estimated that biogas could meet nearly three percent of electricity demand.

As an added bonus, from a waste management standpoint, biogas is also a good thing. Organic materials that are considered waste are everywhere so converting these otherwise useless materials into fuel is an added bonus from a sustainability standpoint. The phrase “one man’s trash is another man’s treasure” comes to mind here. Generating biogas from farms would reduce the nitrogen runoff (that comes from manure) that disrupts local ecosystems, particularly rivers, lakes and streams.

The History of Biogas

Biogas has been used as a fuel source for many hundreds of years. Some anecdotal evidence suggests that biogas was used as early as the tenth century in Assyria to heat bath water. But as early as the thirteenth century, famed traveler Marco Polo, documented that the Chinese covered their sewage tanks in order to generate power. And biogas was widely used in the United Kingdom for many centuries – in 1895, the city of Exeter in the UK actually powered its city street lamps using biogas.

Whenever the actual start date was, we know that biogas goes back at least a few thousand years. Scientists conducted the first documented experiments in the seventeenth century demonstrating how organic materials naturally give off flammable gases during decomposition, under the right circumstances.

Generally speaking, most biogas plants have been created on farms and landfills, because they are chocked full of organic materials, namely manure, trash and leftover crops that are ideal for transformation into biogas. These biogas plants use devices called anaerobic digesters to treat waste. Essentially, anaerobic digesters are airtight tanks that are set up to aid in the biodegradation process and capture released biogas. 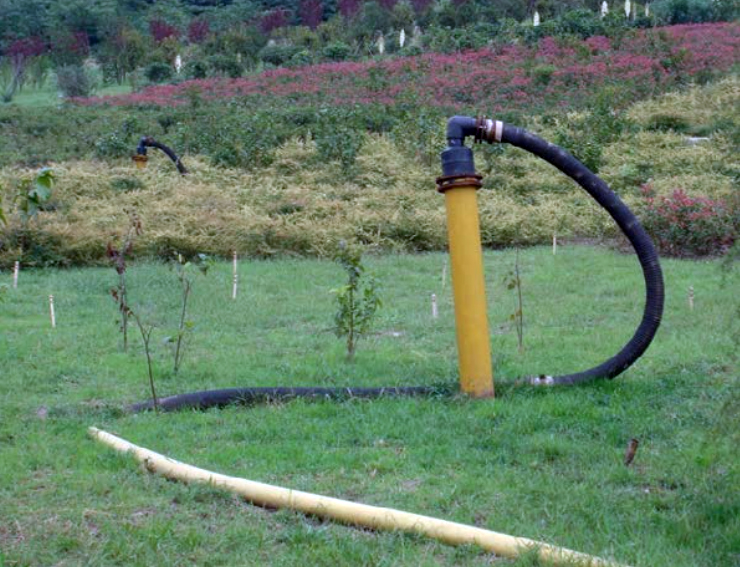 Landfill biogas is produced using the wet, organic waste that is buried and already decomposing within the landfill. The waste is covered and then compressed by the weight of newly added material that essentially smothers the waste below, thereby depriving it from oxygen. Slowly, the gas builds up and can either be released naturally into the atmosphere or captured to be used as a fuel.

Biogas methane is approximately twenty times more detrimental a greenhouse gas than carbon dioxide. As such, landfills in which biogas is left to naturally escape into the atmosphere can be major contributors to climate change.

Farms also hold huge potential for biogas production. In fact, it’s estimated that the waste from cattle farms alone could produce enough electricity to power 3 million American homes. And like landfills, decomposing manure naturally releases methane into the atmosphere, which is far more of a potent greenhouse gas contributor than carbon dioxide. Capturing this gas and using it as a fuel source could reduce greenhouse gas emissions by an estimated 4%.

With respect to how biogas is used, it’s most commonly used in what are called combined heat and power or CHP systems. CHP units are capable of generating both electricity and heat, making them an ideal type of generating source for many large industrial applications.

Going back to Hestia Home Biogas, their units are $3,995 including shipping to your doorstep. They ship fully assembled with everything you need, including double burner stovetop. The units process between 10-30 lbs. of organic waste per day so it will swallow your grass clippings and tree leaves without issues. Suitable for small farmers as well, and they will fit through doorways and elevators for urban rooftop gardening.

The units are fully insulated and have a heat exchanger filled with pet-friendly glycol beneath the digestion chamber intended to connect to an evacuated tube solar heater. Naturally, a wintertime hoop house would help improve performance.

When asked about operating electric generators with biogas, Warren answers:

“This is where the two cubic meter system has its advantages over a one cubic meter system. The 70 cubic feet of biogas per day, it provides enough cooking fuel for three meals per day, while also allowing enough energy to run a generator to watch a couple of movies, while recharging phones and electronics. For home units we recommend 1 kW (1,000 watt) generators or smaller. It is not going to be enough energy to run a clothes dryer or a chest freezer, so the smaller generators will operate much longer. Any generator will require a fuel-gas conversion kit from US Carburetion or similar supplier for around $200.”

Do It Yourself Biogas 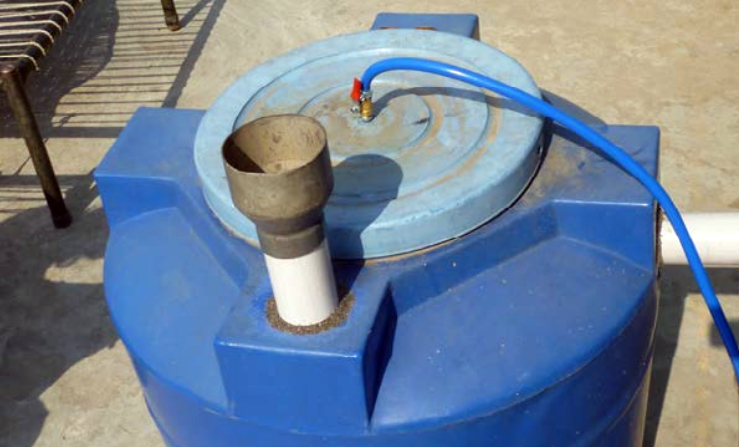 One of the best things about biogas is that anyone can make it. In this way, biogas is a suitable form of power in small, rural applications where access to power may be challenging.

Key to the production of biogas is creating an anaerobic digester. An anaerobic digester does not have to be anything fancy; in fact, digesters mainly need to be air tight and not let oxygen in or out. They also need to have an input valve where organic material can be added as well as an output valve where the gas byproducts can be captured; however, both valves must not allow oxygen to enter.

The second step to the DIY biogas process is to add water to the digester – however, the amount of water as to be proportionate to the waste and leftover space within the digester. As a general rule of thumb, use a 40-50-10 rule, whereby forty percent of the digester is filled with organic material, fifty percent is water and ten percent is space within the system. Keep in mind that organic waste contains water so it’s important to research the water content of each item before adding it.

Temperature is the next ingredient in the DIY biogas process. Heat essentially serves as a catalyst in the digestion process. The higher the heat, the more quickly the biodegradation will take place. However, with higher heat comes more instability – in other words, waste could decompose too quickly and not produce the desired output. Most commonly, a setting of 50-85 degrees Farenheit is used to produce biogas, which should be ready within 30 days. Using higher temperatures should be done with caution. There are a few different ways to regulate temperature including burying the digester underground, putting the digester in a greenhouse or for a more sophisticated system, using a solar collector. The important piece here is to NOT use a non-passive fuel source to heat the digester – the heating source must be passive.

The next important piece of the DIY biogas puzzle is to control the pH of the materials so that they are neutral – around 7. Initially, the materials will be slightly acidic as they’re added to the digester; however, they should become more basic as the conversion process kicks into gear. Over feeding the system – adding too much organic material too soon – can cause the pH to drop, in which case it’s important to add materials like wood, ashes or lime to bring it back into balance.

The size of the system will influence how long it takes to produce biogas. Smaller systems will produce biogas within just a few weeks, but larger systems could take months. Initially, the byproduct will mainly be carbon dioxide. To test the system’s output, put a match up to the output valve. Carbon dioxide leaking will cause the match to be blown out, often with an audible “hiss” sound and a puff of black smoke. As biogas is released, this will occur less quickly and you’ll also notice an odor that smells like rotten eggs. This signals the output is becoming flammable.

Today, countries throughout the world are finding a renewed interest in biogas. This is largely driven by climate changes concerns, as well as other environmental concerns related to land use and waste. In 2011, the United States had 180 operational biogas plants on commercial livestock farms that collectively could produce enough electricity to power approximately 50,000 homes. European countries are investing heavily in biogas as well. In fact, according to an EBA Biogas Report, Europe boasts nearly 14,000 biogas plants. Germany is leading this charge, but other unsuspecting countries are emerging as biogas supporters as well, including Bulgaria, Serbia, and the Czech Republic. These investments represent a generating capacity of 7.5 gigawatts. In Sweden, biogas is being used on a growing scale to fuel vehicles, too – this trend is also on the rise on other countries.

But wide scale adoption of biogas hangs on making the resource more cost effective – this is largely contingent upon yielding higher biogas per input of organic material and increasing the rate of the bio-degradation process. Many researchers are working to make biogas more economical in these ways. A so-called “biorefinery” concept promises to convert close to one-hundred percent of biomass into energy which would have transformative effects on the industry. 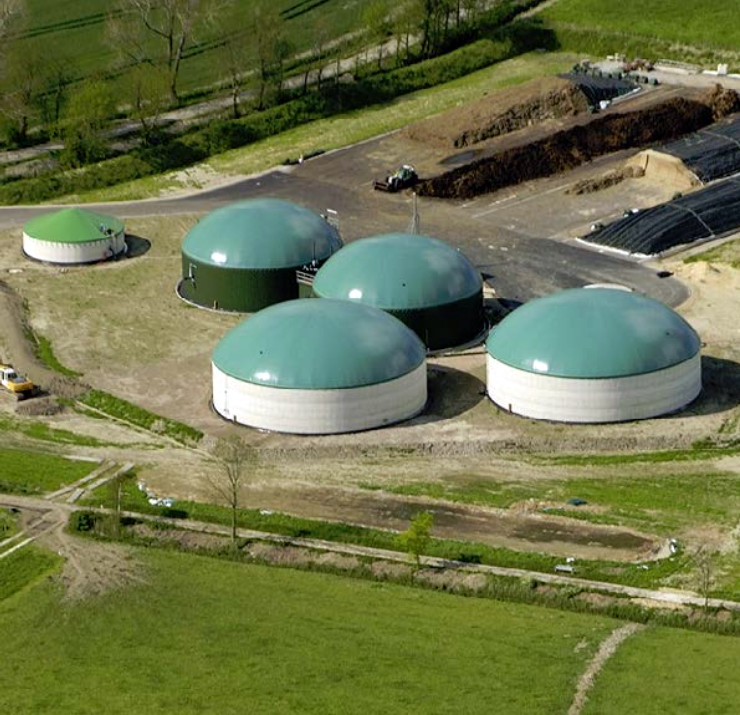